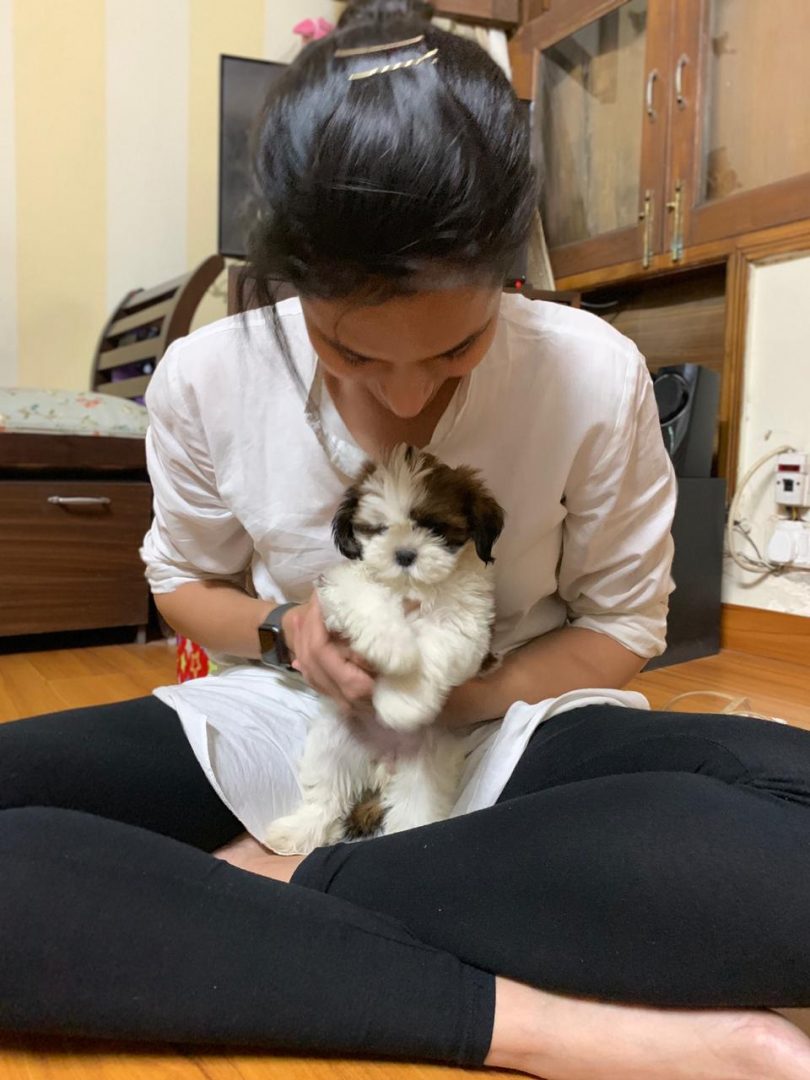 Parvovirus, probably one of the most deathly of diseases that our furry friends can catch is what took our baby girl Zoey away from us in just 5 days of homecoming. After many many years of asking dad why we couldn’t bring home a baby pup, and feeling like the most unlucky person ever because we didn’t have the love of a puppy, we finally decided to get one home. We had a choice amongst 4 Shih Tzu puppies, but this lil’ ball of joy came home first to meet us and we instantly fell in love with her and there was no question of another. And hence, baby girl Zoey Sethi became a part of the fam!

A super playful pup, who showered us with unconditional love from the first day onwards, she was nothing less than a lil’ cute stuff toy but only cuter with her warm cuddles. Instantly the centre of attention in the house, this one was keeping all of us on our toes! She came home on 11th May and up till the 13th of May things were perfectly fine and she was jumping around and playing so much that my mum literally had to tell her to calm down and relax but it’s like she had a spring in her bum that just kept her going and running around in the house with her little hop skip run! What a cute baby!

On the 12th of May we took her for her first checkup to the vet and we were told she’s a healthy puppy and we’re to get her on the following Sunday for her vaccination done. Sounded like a perfect remark from a vet, and we were super excited to spend the upcoming 12-15 years minimum with her!

Little did we know that her health here onwards will only go downhill. Came 13th of May when she stopped eating much and started becoming super lethargic. 14th afternoon we took her to the vet and got her a drip of glucose because she’d gotten dehydrated, followed by another drip in emergency that night when she pooped blood. And we were told to bring her in again in the morning for a Parvovirus test.

None of us were aware about what this virus is, on doing research we got to know that it’s a fatal disease and barely 40% dogs survive it, though small pups have it even worse if their vaccination isn’t in order. And little did we know, Zoey’s vaccination was not in order. And so it was super easy for her to pick it up from any other pup having the same infection.

The first main sign of this virus is dogs stop eating and start being super lethargic, but the one thing that should get your super worried is when they poop blood. That’s exactly what our baby girl did, and hence we got her drips again. On doing the test it came positive, That’s what Zoe did on 14th night and we had to rush her into emergency and get a drip put right then. And even after the drip, she continued pooping blood and puking too. On the 15th when we took her to the vet in the morning, he checked for Parvo and my baby girl’s test came positive for it, leading to a series of emotions and questions in our heads but all of which were overpowered by a whole lot of praying and only praying for Zoey’s health and well being. The vet said we’re not to give her any food or water for 10 days and only bring her in for drips twice a day. Imagine such a chotu puppy not getting any food or water for 10 days! The blood poop continued for the rest of the evening and at night again we took her for her drip, and once we brought her back she wouldn’t do anything else but sleep. She got so weak that she wasn’t even able to lift her head up at all.

The whole night my mum and I lay right next to her, and kept praying that she feels better, only to have her stop breathing and pass away in our arms on the morning of 16th May. Leaving a huge hole in our heart, my choti left us in just 5 days.

The purpose behind me writing this is because right after Zoey passed away, we got to know about another pup that passes away within 5 days of coming home because of the same disease. And not many people know about the disease, even though they are pet parents.

I’d like to throw some light on what exactly is Parvovirus. Parvo is a highly contagious canine condition that spreads very quickly among dogs that have not been vaccinated against it, which is fatal in young puppies in up to 80% of cases. It is dangerous for adult dogs too, but generally adult dogs have both stronger immunity system and are also vaccinated against this time and again unlike their young counterparts.

One of the main problems with the virus is that its very hardy, and your dog/puppy doesn’t even need to come in direct contact with and infected dog. They can catch it through infected bedding, food bowls, or even the ground where an infected doggy has walked / toileted on. The virus can remain active and ready to infect more dogs even after the first dog suffering has either recovered or passed away.

The virus is such that also lives a very long life within the soil once infected, this can be between a time span on 6 months to one year. Indoors though it is much lesser, till almost about 2 months. Thus please give it sometime before getting another puppy in the house if your previous one was parvo infected.

In order to avoid infecting another dog with the same virus, make sure that the dog has undergone their full vaccination cycle and you’ve waited for the waiting period of the vaccination to take full effect too and only then bring them home. This rule should also be applied to canine visitors.

We still don’t know where baby Zoe got the virus from, since neither did we ever have another pet at home nor did she go anywhere else other than the vets’. That’s a mystery that we’re not able to solve, but please please be careful when you get a pup home, make sure that all the vaccinations are in order.

I’d like to do is spread awareness about this fatal disease because the way our family was heart broken, I really wouldn’t want yours to be. Plus I’d pray to God everyday that no other puppy ever gets Parvo because it’s the hardest to see them get drips and then go just like this without even giving us time to say goodbye.

This is my little ode and goodbye to my baby girl Zoey! Love and miss you choti.

Open chat
Powered by
Hello, how can we help you?